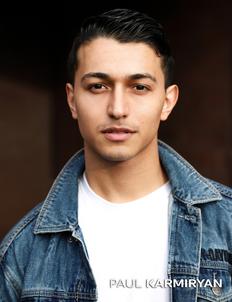 He also recently appeared as a Series Regular for season 1 and 2 of Complex’s “In the Vault” as Omid, the entitled British and Farsi speaking Persian prince with a dark secret. And as a series regular for Snapchat's "Dead Girls Detective Agency" Season 4.

Karmiryan has Guest Stared on Netflix’s “One Day at a Time” Revival, CBS's "FBI," Season 2 of Hulu’s “Zac and Mia,” and has appeared in the new feature film “The Space Between” (Staring Paris Jackson).

He has made appearances in various hit shows such as "Switched At Birth" on ABC, “Flaked" on Netflix, and "The Thundersmans" on Nickelodeon. He has also played a lead role in AwesomenessTv’s “Love Daily” and a supporting role in a Lifetime feature film called "The Stalker Club.” You can also catch Karmiryan in the new national Jack in the Box, Dunkin Donut's and the Headspace app commercials!

Paul Karmiryan's career as a performer has taken him all over the world. Born and raised in Los Angeles, California, he began dancing at the age of 17. In his first three years of training, he became a national champion of Latin ballroom and was crowned winner of So You Think You Can Dance, Armenia. Then, in 2013, he went on to place the position of 3rd top male dancer on So You Think You Can Dance, USA. Thereafter, he took part in "Dancing with the Stars" Season 20 and its national tour, and Derek and Julliane Hough’s “Move” Tour.

Karmiryan co-choreographed and performed for Andrea Bocelli, CW’s “Crazy Ex Girlfriend,” and served as a movement coach for Ed Sheeran in his music video "Thinking Out Loud” (Which has over 2.7 Billion views on Youtube). He has made appearances on Glee, has been featured in Ed Sheeran's "Thinking Out Loud" performance at the MTV EMAs, and has performed as an International Guest Star for India's hit Reality Dance Show “Dance Plus 3.” He was also a featured lead in Ed Sheeran's "South of the Border" Music video, Camila Cabello's "My Oh My" music video, Justin Bieber's "That's What Love Is" music video, and Alesso's "In The Middle" music video.

Paul has also performed for the 89th and 90th Annual Oscars, Hulu’s “Future Man,” Disney’s “Liv and Madie” and “Girl Meets World,” and has performed for international super stars, Luis Fonsi, Natti Natasha, and alongside Jennifer Lopez in her 2018 and 2019 “World of Dance” Promos.

Recently, Karmiryan performed with Paula Abdul for her iconic throwback performance at the 2019 Billboard Awards. He has come back as an All-Star Alumni on So You Think You Can Dance for the past 4 seasons. And choreographed for Hulu’s “Good Trouble” and Ally Brooke's "No Good" music video.